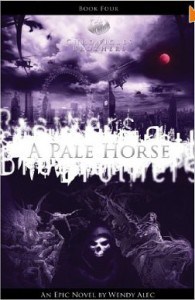 A Pale Horse’ by Wendy Alec is a mind-blowing reading adventure.

The world didn’t end in December 2012 as the Mayans predicted. Advanced as they may have been, they got it wrong! What did happen though, was the launch of an eye-opening new novel that questions the existence of such super humans and how they could indeed be involved in a coming apocalypse…

`A Pale Horse’ by Wendy Alec is a mind-blowing reading adventure which is set to become a best seller. It focuses on cataclysmic future events through the framework of a fast-paced fictional story and touches on everything from global government, martial law and pandemic to the Extra-Terrestrial and UFOs, along with genetic contamination and human cloning.

The fourth book in the `Chronicles of Brothers’ fantasy series, `A Pale Horse’ continues to uncover the parallel worlds of the angelic brothers: Gabriel, Michael and Lucifer and the earthly brothers: Jason, Adrian and Nick. It’s a riveting story that goes beyond sibling rivalry or brotherly camaraderie, spanning the eons of time, with many different subplots and a full cast of characters, some endearing and others definitely not, in an all out war of good against evil.

You can read the Chronicles books in sequence starting with `The Fall of Lucifer’ followed by `Messiah, the First Judgement’ and `Son of Perdition’ or you can just as well start with `A Pale Horse’. I think it’s a great introduction to the series, which will entice you to read the other books as the sheer magnitude of the plot captivates you.

`A Pale Horse’ reveals hidden secrets of the past, conspiracies of the present as well as many eternal truths. It is filled with intrigue and suspense, is not without humour and laced with a touch of romance.

Were there giants on the earth at one time? A mixed race with superior intelligence? What is the basis of mythology? Who were the Titans? Could they have been from another planet? What does this have to do with the extermination of millions of people or of the cover up of the disappearance of millions more? Who will be killed, who will defy death, who will be martyred and will Jason get back with Julia?

Another bestseller from a bestselling author!

Through the Chronicles Series Wendy Alec continues to build her reputation as a best-selling author of mainstream fiction. In `A Pale Horse’ Wendy offers an ingenious, fresh perspective that I’ve never heard of before, on what could take place in the world in the years that lie ahead. Throughout `A Pale Horse’ the challenge is there to make your life count. It’s a worthy wake-up call for the world today.

Download your Kindle version of A Pale Horse from Amazon now